Foot fetish is a widespread yet sometimes misunderstood kink. The sexual objectification of feet is more common in wider society than you might think, let alone among gay men. It’s time to take a look at foot fetish and foot worship.

The fundamentals of foot fetish

For many men, their appreciation of feet is something they can trace back to adolescence. Sports, sleeping top to tail and changing room experiences have all been mentioned for sparking a sexual interest in feet, which, for most gay foot fetishists, develops into a love of strong, healthy and, often, large feet.

But there’s an important distinction between true foot fetish and what’s known as ‘foot partialism’. Strictly speaking, a bona fide foot fetishist cannot become sexually aroused without concentrating on a guy’s feet, whereas foot partialism refers to a simply finding feet a turn on. 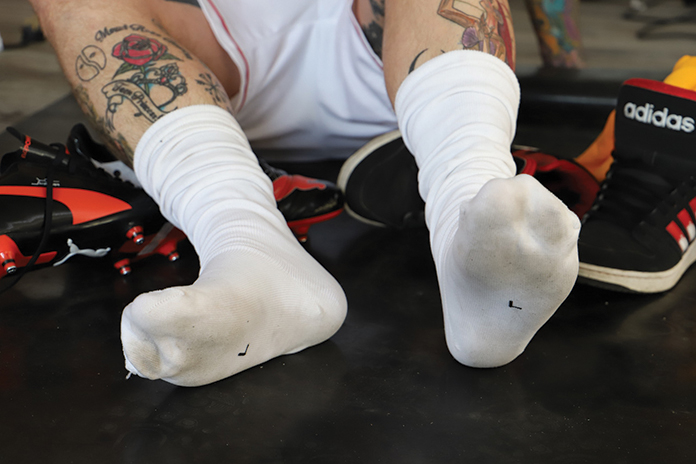 Getting a foot man off

Whether or not you enjoy having your feet touched is highly personal, but if you find yourself wanting to get a foot man off, it can be as simple as letting him hold and touch your feet. A foot ‘top’ is the one who’s foot is the focus of attention, so to be a good top, you may just need to have the type of feet the guy’s into.

Many guys into feet like a particular colour or type of sock on their men and have a preference when it comes to how clean the socks should be – sweaty white socks are especially popular. Others like the smell of worn trainers, the look of leather boots or to wear a guy’s shoes during play or sex.

When it comes to two-way foot play, some like tickling, rubbing or massaging the feet, or licking and sucking their partner’s toes. Others prefer their partner’s feet on their face, or using a tickler, paddle or flogger to gently strike the feet.

The guy will likely let you know exactly what kind of foot play he prefers, but if you want some extra tips and pointers, don’t hesitate to reach out to other foot fetishists in the community on www.recon.com