Getting in the grunge pool seemed to be a foregone conclusion; we all knew from the beginning that it was only a matter of time.

When we at Recon decided to do a focus on gunge, I did a little digging – both online and in self. It wasn’t something I’d ever really considered or had much exposure to. I mean, I’m messy, but there was no real sexual connection. I think it’s also fair to say that gunge has a bit of a bad rep. To the outside eye it can be seen as silly or ridiculous, and that stigma was floating around in my head as well.

My first pause for thought came when we interviewed member MUDDYMIND about gunge play, and he referred to (unsurprisingly) mud. Specifically, in relation to rugby. I stopped and thought about it and remembered how much I’d loved getting covered in the stuff on the school playing field. Hmm. Mud + rugby kit = yeah ok, maybe.

We decided that we should do more on the topic, and that gunge would make a great video piece, so we rounded up three members who were fans of this gloopy play and plotted.

Now, on more than one occasion during the video planning stage, it was insinuated (quite heavily) by some of the members that I’d eventually be joining them in the pool. I LOLed and haha’d and we’ll see’d in response to their messages, uncertain of whether this was something I wanted to do. They knew I had a curiosity and they were leaning into it, but I had concerns about the separation of work and play – which I realise is semi-laughable when working for Recon.

The day of the shoot arrived, and I got to the location. On climbing the stairs, I came across a scene straight out of American Psycho – the majority of the flat was covered from floor to ceiling in plastic sheeting to protect from splatter. Instead of triggering my gunge flight reflex, it made me smile and marvel at the work required for this form of messy play. 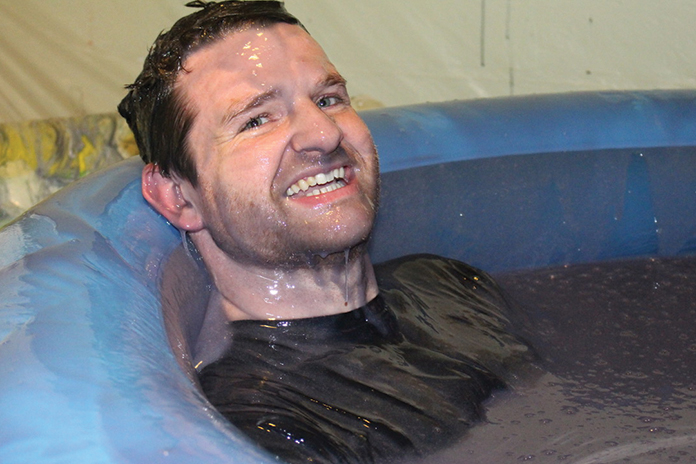 Once everyone had got there and we’d spent an hour or so mixing the gunge, we were ready to film. As you can see in the videos we posted, it got pretty sloppy pretty quick. Filming became fraught with danger and slip hazards, and the cameraman and I were soon more than a little messy ourselves.

Eventually, we finished filming and started to pack away the camera equipment. As I reached to take down one of the lights, I heard one of the three in the pool say, “We’re waiting”. I was reminded of the scene in Bram Stoker’s Dracula when the three harlot vampires coerce Keanu Reeves to the writhing sex bed. I guess the time had come to make a decision… Fuck it.

I slid across the room and carefully stepped into the pool. One thing you should know about me is that I’m ridiculously clumsy, so this was no mean feat. It was decided, by more learned men than me, that a bucket over the head would be the best way to kick things off. I waited, grinning, staring uncertainly at my colleague. Then it hit my head; this warm, wet sensation that was both claustrophobic and kind of liberating. I stood there dripping and a bit dazed, not sure what to do next. The decision was taken out of my hands when someone shoved the back of my legs and I sploshed down into the pool. It felt like a warm, gloopy bath. Your senses overloaded as you’re fully immersed. I decided to sink in, letting it cover my head. This was a bit too much, as I lost sense of up and down, then even when I popped back up, I couldn’t tell I’d broken the surface, as the gunge is so thick the air doesn’t get to your skin until it starts to run down you.

The guys slid back down into the pool, and everyone became entwined – it was a lot of limbs for one small space. You feel hands on you which you can’t instantly tell the owner of, and your legs are wrapped around someone, but you’re not altogether sure who. It’s strange, but really pleasurable. You kind of have to let yourself go. Which I did and had a very pleasant evening as a result.

Eventually it was time to get out and shower off, which in itself is a whole process – making your way to the bathroom without breaking your neck. I’d like to say that this was the end of my adventure – that I got dressed and headed home – but I’d be remiss not to make note the cleanup process. It was a long process. It took three of us roughly 3 – 4 hours to get everything cleared away. Ferrying buckets of gunge from the living room, down the corridor, down some steps, and into the bathroom. Flush and repeat numerous times over. Then it’s on to the plastic sheeting and the unavoidable splatter cleanse. I guess, though, as with all thing, you have to take the rough with the slippery, slimy smooth.

For this experience, I put aside my prejudiced fears and tried something new that I enjoyed – several things in a way – but could I see myself doing it again? The whole experience ended up being kind of intense, due to expectation as well as sensation, but it was certainly the good kind of intense. I think the answer has is a definite yes, but with a few caveats: either less gunge in the pool to reduce the cleanup time, or more men to make lighter work of it…I’m leaning towards the latter.

If like OhBilly you have a curiosity about this kind of play, be sure to check the Gunge interest category on recon.com to find guys who could lend a hand/bucket. Be sure to check out the gunge videos on the Recon.com YouTube channel