Sam Syron is a man with a plan! He’s in charge of lots of dildos and cockrings and things at Old Compton Street’s well-known salacious corner shop, Fifty & Dean. Well, we say corner shop. It is, technically, on a corner, but it doesn’t sell crisps. It’s a sex and fetish shop, in case you hadn’t clocked that already. Sam’s got a soft Irish voice and a hard Irish penis – a winning combination! He’s also got a knack for selling fetish stuff to those who want it, and has lots of ideas on how best to do that. He told us all about the grand changes he’s got planned for one of Central London’s best known adult shops.

HEY SAM! So tell us about Fifty & Dean’s rebrand!

HEY QX! So Fifty & Dean is rebranding because we’ve had a bit of a confusing identity over the years, I’ve been working to change that into a more focused fetish identity and I think it’s time we relaunch ourselves as the fetish store in Soho.

What changes are you making to the shop?

Well, as I mentioned already we’re focusing more on Fetish. Prowler is the best at what it does so there’s no need for us to compete. We’ll just go in a different direction and offer customers something they don’t and likewise they will have products on offer that we don’t, the vision is to have the two Prowler Stores offering everything you could possibly want.

And the name obvs has something to do with Prowler, tell us about that.

What kind of stock will you have?

Mister B Amsterdam, AD Fetish, Maskulo, Bleachers and Co., Crackstuffers, Mr Hankey’s Toys to name a few. But realistically if I was to name every brand we carry you’d need another page. Easiest way is to come in July 2nd and check it out. 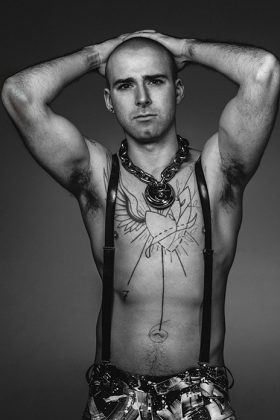 Will you sell actual stocks?

Don’t be ridiculous. Of course we will.

What’s your fetish product of choice?

Why and when did you first get into the fetish world?

Ass, then they can have whatever is left in their mouth.