Are you into trackies, m8? Recon.com fills us in on this ever-popular fetish!

Picture a guy in ‘trackies’ and you’ll probably think of a tracksuit from a well-known sports brand tucked into white socks, a backward-tipped cap, trainers and maybe a status dog. Originating from the UK, this look has become a firm fetish favourite in its native country and has spread in popularity throughout Europe and beyond. 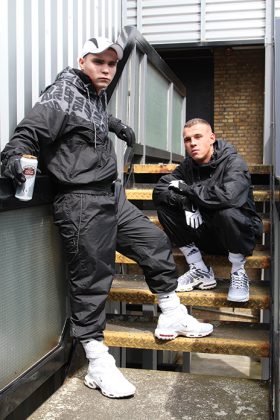 It’s a way of dressing and a fetish linked to a specific sub-culture, with different designations in different countries. Trackies are strongly associated with ‘chavs’ or ‘scallies’ in the UK, ‘kiffeurs’ or ‘racailles’ in France, ‘prolls’ in Germany and ‘roadmen’ in America – although the look is pretty similar wherever you go.

Some trackie fetish men say they love the gear because it brings to mind some of the first guys they noticed as teens, while others are attracted to the trackie look as an overtly ‘lad’s lad’ version of masculinity. In popular culture, the image of trackie-wearers is often young, rough and unruly, manly in a brash, unapologetic way. It’s also a sportswear-based fetish, so it’s often the case that poster boys for trackie gear are often in shape.

While some fetish men who wear the trackie look, or go for guys who do, don’t fit the profile on paper, the appeal of the gear has a lot to do with the posturing bravado it evokes. The swaggering, impulsive and defiant attitude many think of as the epitome of a guy in trackies can be a massive turn on.

As with any clothing fetish, there are a few golden rules to trackie fetish gear. If you want to experiment with the look, don’t choose just any tracksuit; you’ve got to be very selective about what you wear. The basic trackie and trainers combination is pretty common in the UK, so fetish men make a distinct effort to differentiate themselves through certain labels and a set style of wearing them.

For trackies, Recon recommend going for Nike, Adidas or Lacoste and keep it in good condition. Whatever you wear though, don’t mix and match; your trackie brand should be the same top and bottom. Take a look at French trackie style for inspiration. Trainers should be Nike, and make sure your trackie bottoms are always tucked into your socks. Generally speaking, the more expensive the sportswear the better, the more luxe brands are most desirable. Make an effort putting your gear together if you want to be noticed for the right reasons.

Trackie fetish gear is at home at most sportswear nights, although there are also nights around dedicated to purely trackie fetish, especially in the UK, France and Germany. Guys already into scene can point you in the right direction, so don’t hesitate to reach out to other fetish men in the Recon community at www.recon.com!

Check out www.recon.com for info on loads of other fetishes, plus guys into the same thing as you!