I was so fascinated by the new products and in the general concept of electro play that I got on the phone to Cyrex, the UK-based manufacturer and persuaded them to send me some samples to ‘arse test’.

When I put the phone down I could feel my heart racing at the prospect of trying the products out, but I’m not sure if it was excitement or pure fear!

After 24 hours of contemplating my impending electro sex experience the DHL guy arrived with a parcel for my attention.

I could feel my heart racing again, but this time it was more of a nervous feeling as I was now one step closer to the world of electro stimulation, which was still a mystery to me. Sure, I knew what it was, kind of, but I had no idea what it would feel like!

The packaging was top drawer and some of the items looked pretty expensive. I had been sent an ElectraStim Adventure Pack (EM32-L) which included the stimulator unit, a pair of adjustable conductive rubber cock and scrotal loops, conductive gel, a connecting cable, battery and instructions. The items were all in a handy storage case.

I KNEW WHAT IT WAS, BUT I HAD NO IDEA WHAT IT WOULD FEEL LIKE!

The instructions also show a diagram of two people sharing the stimulation whilst shagging! The stimulation actually flows between you and your partner wherever you touch each other – ridiculous! 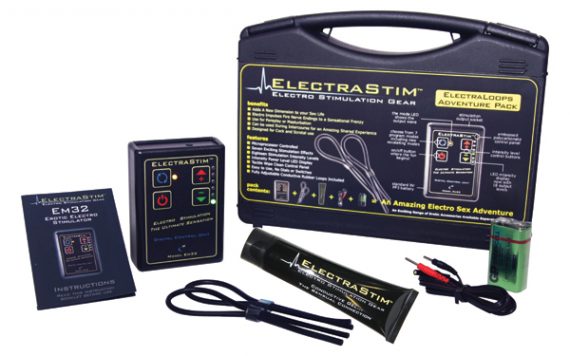 I switched on the stimulator and all of the lights flashed in sequence to indicate that it was ready for action but I couldn’t feel anything because the intensity always starts at zero. I pressed the intensity+ button and the bottom one of six lights came on, but I still could not feel anything. I thought to myself, God I hope this is going to work for me.

BY THE TIME I’D PUT THE BATTERY IN, MY DICK WAS WELL ON ITS WAY TO A BONER.

Have years of excessive shagging and sticking things up me de-sensitised my arse? I pressed the button three more times taking me to level 4 (out of 18) and then, thankfully, I could feel a mild tingling sensation.

The stimulation changed from a smooth sensation to a very slow and gentle waving or massaging effect, which felt amazingly good. I pressed the Mode button again and the wave started off slowly and then automatically got faster and faster before slowing down and repeating the cycle.

The 7 different stimulation patterns are amazing, if you like the general experience that is. The intensity felt stronger when less of it was inserted and slightly milder as it went in deeper so I had to compensate by increasing or decreasing the power level. Apparently the deeper you go inside the body, the fewer nerves you encounter and hence the milder it feels, quite the opposite of what I expected. I loved the arse toy and now I’d tried electro sex was really looking forward to some cock play…

I removed the cables from the Depth Charge and took the special conductive cock and scrotal loops out of the kit. I adjusted one of them to a large size and slid it down my cock and over my balls. I then tightened it up a bit to get a good snug fit as described in the instructions.

I’M NOT SURE IF I WOULD HAVE BLOWN MY LOAD HANDS FREE, BUT I WAS EXTREMELY CLOSE!

I then slid the other loop half way down my cock and tightened it. I then connected the cable by pushing the little plugs into the end of each loop and smeared some of the conductive gel around each of the loops. The gel apparently gives better and stronger sensations… Hmmm, let’s find out!

I switched on the stimulation unit and again increased the intensity as before. This time I only got to level 3 and could feel it working. By this time my cock was stiff as a rock hard as an iron bar and I wanted to try out the different stimulation patterns on my cock and balls. I pressed the mode button and the sensations started to gently and slowly massage my cock.

I could actually see my dick moving in sympathy with the light on the box, which shows what the output is doing! I pressed the mode button again and again to see what other crazy sensations were available. One of the patterns was an escalating pulsing effect that made my dick literally jump up and down and there wasn’t a thing I could do about it! I’m not sure if I would have blown my load hands free but I was extremely close!

It’s hard to explain exactly how it feels and I guess that it’s not every ones thing. At the end of the day it is an electrical type of feeling but it’s very controllable and not a harsh or aggressive sensation. The ElectraStim Adventure Packs start at £99 and there is also the new remote controlled stimulator and a higher spec. unit called the SensaVox which can also be controlled by audio.

Once you’ve made your initial investment and splashed out for a stimulator unit there’s a very wide range of accessories, which cost from a few pounds to well over a hundred.

• The products are all available at www.electrastim.co.uk and can also be found in good adult stores all over London and the UK.